The focus at Platincasino is clearly on the popular Merkur games from the German gaming company Gauselmann. Classics like Triple Chance and arcade hits like Eye of Horus are just as much a part of the programme as the new release Dragons Treasure and many more. Platincasino currently offers a total of 120 slot machines, over 70 of which are from Merkur.

The games from Merkur are all characterised by tested random number generator software, high payout rates of at least 95 percent and an almost unmanageable variety of themed worlds. On top of that, most of them offer additional features such as free spins and risk games, where the winnings can be multiplied once again, in addition to the already high winning possibilities.

The Platincasino operates under a gambling licence from the Isle of Man and is one of the few online partners with which the renowned Merkur brand works together. Secure a great Platincasino bonus with us and get up to 100 euros for free!

The most popular Merkur games at Platincasino

Dive into ancient Egypt, where the sky god Horus hoards huge treasures. Collect three matching symbols on at least one of up to 10 paylines and enjoy ancient treasures and untold riches. The falcon head of Horus acts as a wild symbol and replaces all other symbols except the pyramid with its divine power, so that the player receives the highest possible line win in each case. If more than one line wins, the winnings are added together. And the best thing is: If the reels of the Merkur game show three pyramids, you get a whole 12 free spins for free. Reason enough to finally meet the god Horus face to face, isn’t it?

This absolute Merkur game classic has lost none of its fascination even today. Simple, but ingenious – that is the recipe for success of Double Triple Chance. Three reels, five paylines and lots of fruit that promise big wins. Three identical symbols per line activate the payout, multiple line wins are added together. And if you crack 77 three times, you really cash in. The special highlight: If you manage a full screen – i.e. if all visible reel fields are occupied by the same symbol – you activate the so-called Rewin feature, which gives you the opportunity to double your winnings up to three times in a row. So go for it and get your triple chance!

Blazing Star is the supernova among Merkur slot machines. No wonder, with five suns on a line, players receive 5,000 times the regular line win. There are a total of five paylines and individual line wins are added together. Dare to play this Merkur classic and with a little luck, your star will soon shine brighter in the sky than all the others.

The jester’s hat is your key to happiness. Why? Quite simply, the jester’s cap turns two normal symbols into wild symbols, which in turn substitute for all other symbols, guaranteeing a full payline and therefore high payouts. The jester himself also stands for high winnings and functions as a wild symbol. If it appears next to two or more identical symbols, it completes your winning line. Jollys Cap is played on five reels with up to 10 paylines. The payout starts with three identical symbols per line on the first three reels. Enjoy true fool’s freedom – with Jollys Cap from Merkur!

Mirror, mirror on the wall, who has the highest winnings in the land? With five reels and 10 paylines, the prerequisites are at least very good in Magic Mirror. And the best thing is: With only two identical symbols, the first winnings come when the sorceress, magic book, ring or unicorn appear next to each other. All other symbols must be next to each other at least three times. Really magical wins are promised by the magic mirror, which was the inspiration for the name of the slot machine. It functions as a wild symbol that completes any symbol combination. With three mirrors, you can win big money and ten free spins. As with most Merkur slots, winnings can also be doubled in a risk game in all-or-nothing mode.

Magic Mirror Deluxe II is the logical further development of the Merkur classic Magic Mirror. The game shines with even better visuals and the familiar game principle: On five reels with 10 paylines, two adjacent symbols are sometimes enough for a win, namely in the case of the ring, sorceress, unicorn and sundial. Other symbols only bring cash in triplicate. The magic mirror is also the wild symbol in the deluxe version and three mirrors unlock 10 free spins. In these free spins, a bonus symbol spreads across the winning reels and also promises high wins – even if it does not appear from left to right.

Brew a powerful potion to conjure up mysterious powers and peer into a future full of winnings with the crystal ball, in the Merkur slot Crystal Ball. In a fantasy world full of magicians and druids, you try your luck on five reels with 10 paylines. The crystal ball acts as a wild and scatter symbol, i.e. it completes paylines that are not yet complete and gives you 10 free spins if it appears three times anywhere on the reels. In the free spins you get a bonus symbol that can increase your possible winnings even more. Take a look into the crystal ball and enjoy fantastic winnings!

Take on the role of the heroic Siegfried and defeat the fearsome dragon to reach the fabled treasure he guards. On five reels with five paylines, two identical symbols are enough for cash, namely the dragon slayer, the dragon treasure and the sword. If you get more than two symbols – or even all five on one line – fabulous winnings await you. The dragon acts as a wild symbol and completes your paylines for even higher payouts. Head to the dragon’s lair in search of the coveted treasure and return with untold riches!

Practice being a safecracker and grab the cash from the vault – in Extra Wild, the slot game for master thieves. The machine has five reels and ten paylines. The highlight: Three symbols next to each other are enough to win and it doesn’t matter on which reels they are, the first, the last three or the one in the middle. All symbols always follow each other three times per reel, so that you can multiply your winnings several times with a bit of luck – because several lines are added together in the event of a win. The safe acts as a wild symbol and brings money, no matter where it is. In addition to at least two identical symbols, it also completes a winning line and brings up to seven times the actual line win. Extra Wild therefore means: extra winnings!

All Merkur games are also playable on mobile. A separate Platincasino app is not required.

Get your 20 Freespins now!

Register now and get 20 Freespins for free without deposit. 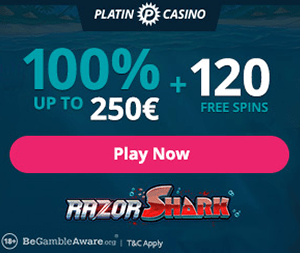